Multiconfigurational self-consistent field (MCSCF) and Hartree-Fock (HF) are theoretical methods that solve a Schrodinger equation for a fraction of the molecular electron-electron interaction energy orbitals. The HF method is the least accurate of the two, only calculating a few orbitals, while the MCSCF method uses a better approximation and calculates for a larger number of orbitals; however, both are limited by the Born-Oppenheimer Approximation. This approximation simplifies the nuclear terms into a summative variable and eliminates the nuclear kinetic term from the Schrodinger Equation (See Figure 1).

Fig 1: The Schrodinger Equation after the Born-Oppenheimer is applied.

The internal error of the approximations may result in a small error margin as well as an increased number of calculations needed to produce accurate results.

Performing these calculations on thiophenone (C4H4OS), chosen for its chemical properties, will yield a deeper understanding of the photoionization process. With a complete understanding, one could predict outcomes of reactions and exert control over molecules. In Dr. Pathak’s publication, Isomerization and Fragmentation of Polyatomic Molecules Induced by Ultraviolet and Extreme UV Light, thiophenone was exposed to high energy UV laser pulses to first ionize it and then induce molecular fragmentation (See Figure 2). 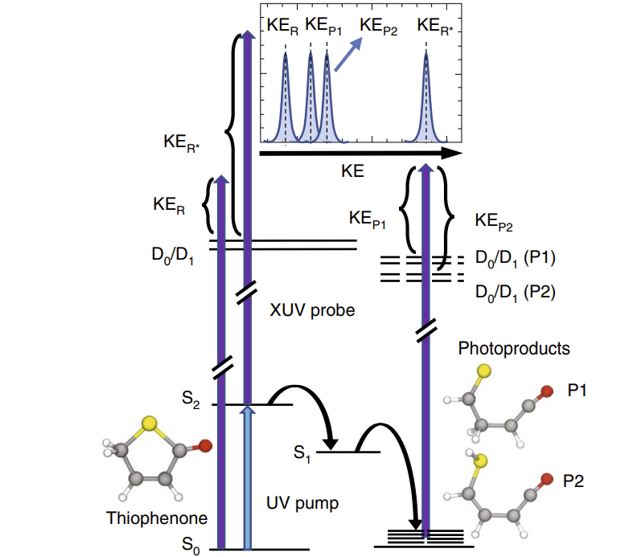 In this way, he was able to identify the energies associated with the different fragments of thiophenone.

Dr. Pathak’s experiment was limited in only providing the excitation energy and the fragmentation energy, so using his findings as a starting and ending point, I calculated the potential paths of the molecule to fill in the blanks and expand our understanding of the process from stable to fragmentation. I created a molecular z-matrix to model the geometry, and after setting select bonds constant, I calculated a geometrically optimized HF energy. The bonds I chose were as such to ensure that the molecule would fragment in the intended way. To achieve more accurate results, the HF energy was used as a starting approximation for an MCSCF calculation for the ground through the fifth excited state. This process would yield only one point at a single set of bond lengths, thus, I increased select bond lengths incrementally to slowly pull the molecule apart and repeated the calculation process for each point. I found results for two fragments, C3H4+ and H2CS+, and then compared them to the associated energies found by Dr. Pathak. 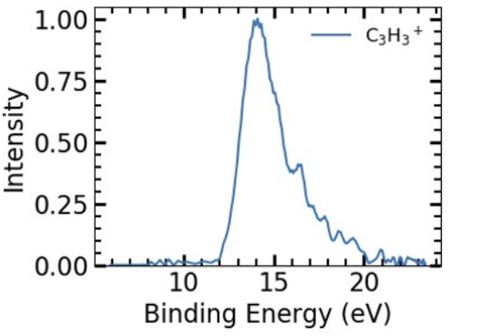 My graphical results suggested that according to my calculations, thiophenone would fragment at around 15 eV (See Figure 3).

Fig. 3:  This graph shows the potential energy vs. the bond length of C3H3.

The similarity between my calculations and Dr. Pathak’s findings are promising, especially if the internal error of my calculations are taken into account. Additional calculations will be performed to refine the theoretical findings, which in theory, should lead to an even closer calculated value.

H2CS+ was found to occur at approximately 12 eV and 15 eV respectively (See Figure 6). 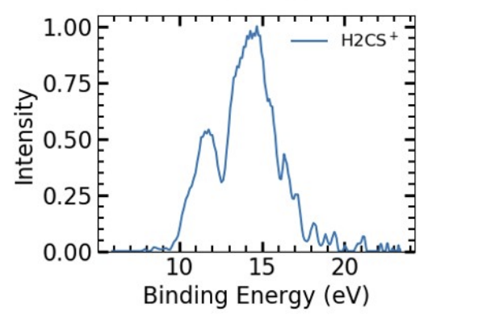 The theoretical values I calculated suggest fragmentation occurring at 11 eV and around 15 eV (See Figure 5).

Fig. 5: This graph shows the potential energy vs. the bond length of H2CS.

The initial state of these findings are very promising, with additional calculations hopefully following the same trend. In future calculations, I expect that the energy differences between the experimental and theoretical results will only draw closer. There is a limit to the accuracy of my calculations caused by the nature of the approximations and methods used, which will likely prevent 100% accuracy in the results. That being said, this is a great first step that suggests a promising amount of potential in future calculations of the other fragments of thiophenone.

I would like to extend a deep level of gratitude and appreciation towards Dr. Greenman, whose help and mentorship has been vital throughout my research. With him I have grown as a physicist and as a student. Additionally, I would like to thank Dr. Greenman, Dr. Flanders, and Kim Coy, for planning, organizing, and running the REU and its programs. Thank you to my advisor Janae Mooty for working with me and encouraging me to pursue the opportunities that have come my way. Finally, I would like to thank Iris Horn and Julia Bellamy for their support inside and outside of the office throughout the REU. Thank you NSF for funding this amazing program!