Computational Prediction of the Structure of Coulomb Exploded Molecules

Coulomb Explosion Imaging (CEI) is a method in which femtosecond X-ray free-electron (XFEL) and strong IR lasers can charge up molecules through sequential multiphoton ionization that then explode in charged fragments [1]. The final momenta of these charged fragments are recorded, and contain information about their initial geometry that are obscured in other imaging methods. There are many methods to determine the geometry of molecules such as studying reaction pathways, analysis through molecular orbital theory, performing spectroscopy, solving the molecular Schrodinger equation, and so on. These all have their advantages, but a common limitation is that no current method can directly determine the geometry from CEI experimental data.

Fig. 1: The second order differential equation relating the mass and the second derivative of the position to the sum of the Coulomb force that can be used to predict the initial geometries of CEI molecules.

The goal of this research project is to predict the geometry utilizing Newtonian dynamics. Relating Newton’s Second Law to the Coulomb force, the second order differential equation (Figure 1) can be solved using standard integration methods. To solve a second order differential equation there is a need for two initial conditions: the position and the momenta. This poses a problem since the initial position is what we are trying to predict, so the development of a code utilizing an inversion method is necessary.

The code developed for this research has three main classes. A Molecule class that holds information about the charges and masses of each charged fragment, a Testing class that simulates CEI final momenta data (that eventually will be replaced with a Data class to utilize experimental data from the JRM Lab), and an Inverter class that solves for the initial starting geometry.

The inversion method was tested by simulating OCS CEI explosion of the O+C+S+ charge channel. The mass of O, C, and S were used and a randomly assigned initial geometry was generated. The final momenta after the simulated propagation of CEI was used in the inverter method described above (see Figure 3). Partitions of 15, 30, and 60 were run under the assumption that there was no initial kinetic energy. It can be seen in Figure 4 that as the partitions increased the number of solutions also increased (91, 406, and 1711 respectively). There seemed to have been close initial guesses to get final momenta similar to the simulated final momenta for one charged fragment but not the other two.

From each solution point, it has its associated initial geometry that was compared to the simulated starting geometry of OCS. It can be seen that the initial geometries for 60 partitions in Figure 5, that the lowest non-normalized RMS error is 1.23 (red line) and differs in position and shape to the simulated geometry. Comparing to 15 partitions (not pictured), the error only decreased from 1.24 to 1.23. This is an order of 10 increase in the preciseness of the energy partitions but only a 0.01 change in the error. 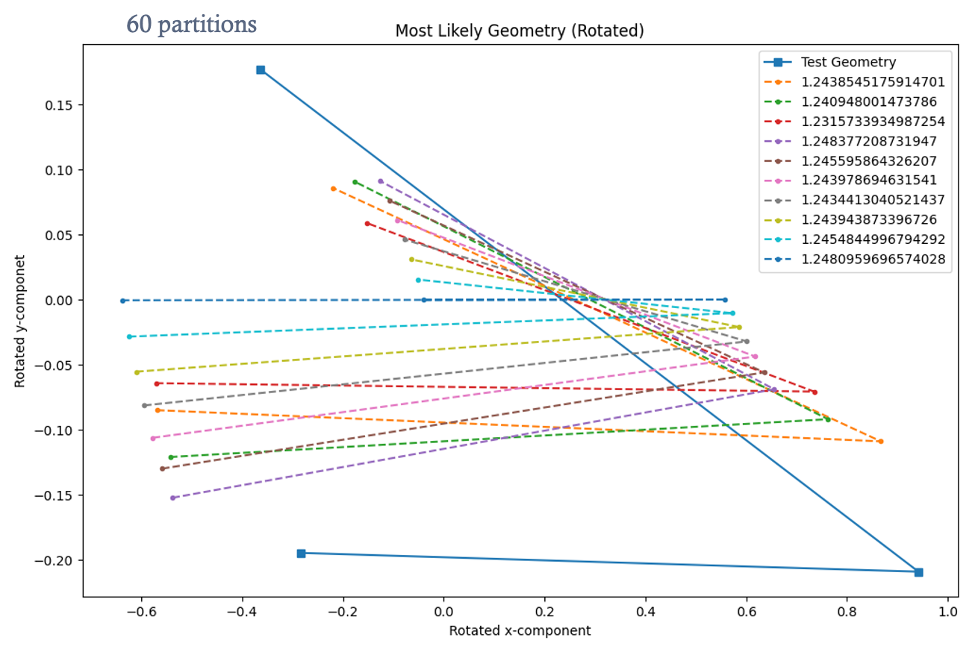 To determine if this method has validity in trying to predict the geometry of CEI molecules, 1000 simulations of OCS were run under the conditions described above, all with different randomly assigned initial geometries. A comparison of the non-normalized RMS geometry error to the momenta error indicated a high density of points at low momentum error and similar geometry error (see Figure 6). This suggests that there is a consistency to the solutions and incorporating further physics (initial kinetic energy, charge-up model, etc.), computational power (more precise energy partitions, N-fragment framework, 3D space, etc.), and comparison to experimental data would bring the inversion method up to predicting the initial geometries of CEI molecules. 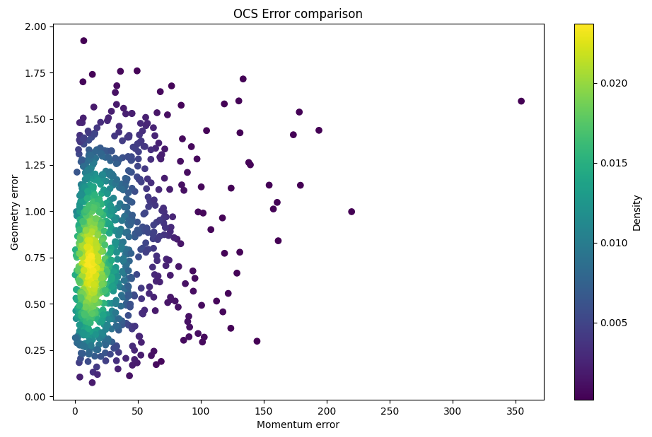 Firstly, I would like to thank Dr. Loren Greenman for being a great advisor for this research project and helping to develop the code. I would also like to thank Dr. Daniel Rolles for sharing his experimental CEI data and providing a link between this project and Lana Chaleunrath-Pham's REU project. I am also grateful to Jeremy Kamman for his camaraderie during this research. I would also like to extended my appreciation to the rest of the Physics REU 2022 cohort for the kindness and shared learning experience that we got to experience this summer. Additionally, thank you to Bret Flanders, Loren Greenman, and Kim Coy for organizing and managing this program, as well as Kansas State University and the National Science Foundation for funding of the program.